D.A. Powell on "The Mad Place" of Poetry

Undeniably one of America's greatest living poets, D.A. Powell is greeted affectionately as "Doug" when he steps into any of his favorite San Francisco haunts. His unassuming air, his friendly and casual manner—these qualities nearly mask the intricate clockwork of his mind, which speeds past the more predictable pleasantries of small talk into a domain resembling the verbal contours of his poems. When he speaks, his body seems to surrender to a slight tilt of his head, as if he's drawing one word at a time from some far-off place. "Is that the place poetry comes from?" one might ask, but his answer will likely express as much doubt as conviction. He appears most comfortable with the exchange of trivia—trivia that turns out to be strikingly profound.

Gulf Coast is publishing two of Powell's new poems, "All About All Hallow's Eve" and "Is There Something Like Murder for Trees", in the upcoming Issue 32.2. Editor Justin Jannise sat down with him recently, in an enclosed booth resembling something like a confessional, at the Irish Bank in San Francisco. Neither "interview" nor "conversation" seemed like the right word for what passed between them, but Powell agreed to be recorded. 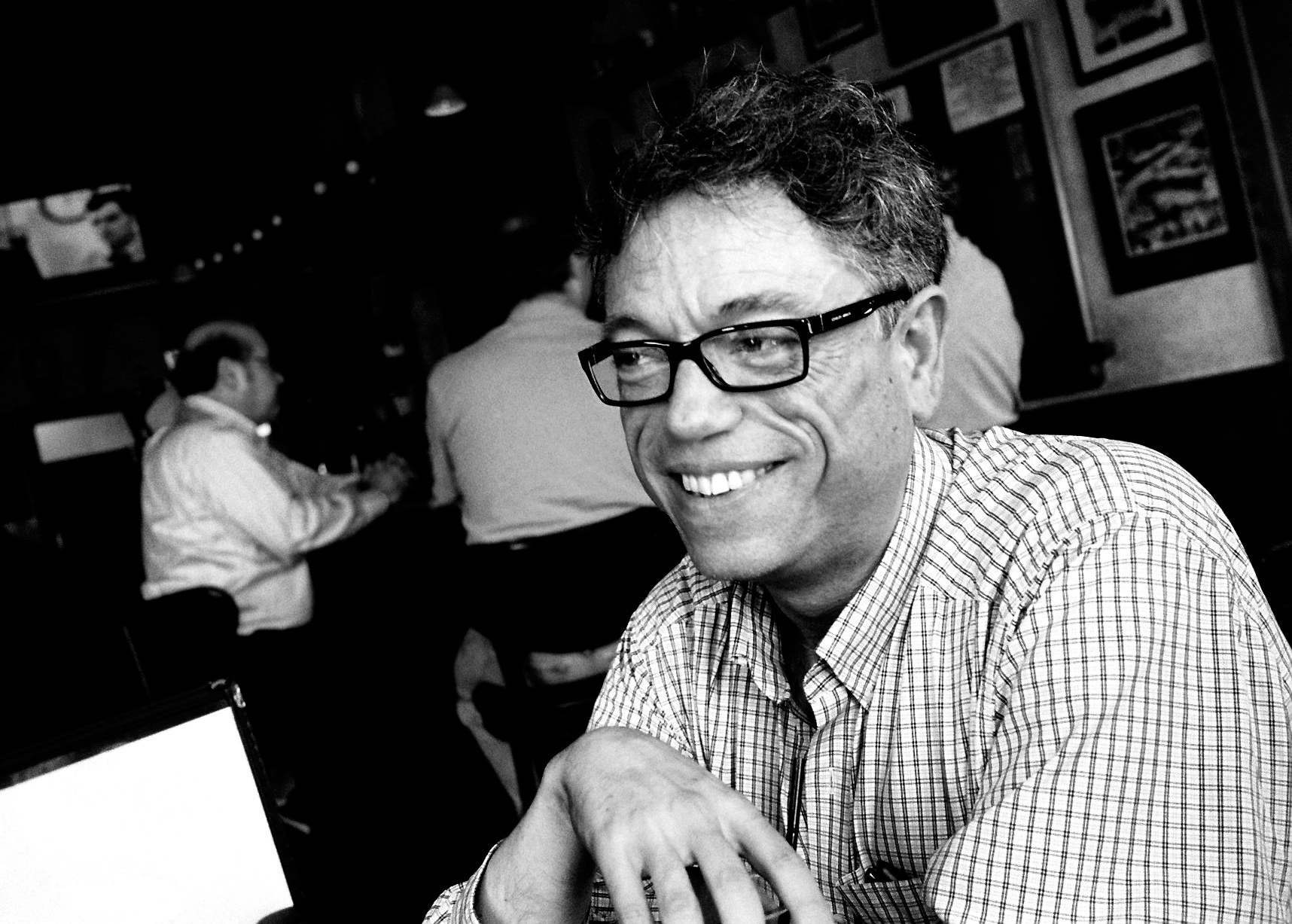 D.A. Powell's books include Repast and Useless Landscape, or A Guide for Boys, both from Graywolf Press. He received the 2019 John Updike Award from the American Academy of Arts and Letters, and he teaches at the University of San Francisco.

DP: And that’s one of the pleasures of poetry. You can use language and be absolutely true to what you’re saying, and at the same time people have an opportunity to misread it as something scintillating or shocking or surprising.

JJ: Do you think puns are the best way of creating that opportunity? :

DP: Not just puns, but emphasis. Look at William Carlos Williams’ “To a Poor Old Woman.”

Just by using a line break you can switch an emphasis, and some other meaning comes out, hidden there all along.

JJ: That’s something you discover along the way?

DP: I hope so. Not that you can’t write poetry without knowing anything about it. It’s like dance. Anyone can do it and not necessarily know they’re doing it. Or what the rules are. The hope is that people will get some of what you intended, but no one’s ever going to get everything that you put into a poem. To me, writing is the mad place where things begin to come into focus. Correspondences are made between things, and they lead you [the poet] to some discovery.

JJ: Should writing workshops focus more or less on intentions versus discovery?

DP: How is intention any better than discovery? Don’t you want to sit down and figure out what you think after you’ve done the writing? I think it’s good in a workshop to talk about intentions, because then people can give you a response and say, “I didn’t get that, and now that you say that’s your intention, here are a couple things that I think would help make that clearer.” But I don’t know if intent even needs to be clear. Sometimes you want intent to be hidden, you know? Sometimes you’re writing a poem to talk about how oppressive the government is, and you definitely don’t want the censors to ping off. So you create a metaphor that people will recognize but that you don’t have to explain or be bound to if somebody comes knocking at your door, saying, “Why are you criticizing the government?” Then you can say, “I wasn’t criticizing the government! I was talking about oak trees”.

JJ: That reminds me of Ilya Kaminsky’s Deaf Republic.

DP: Kaminsky creates a world, a world built on metaphor. And the metaphors are encoded in a language that the people of this village develop amongst themselves in order to have a circuit of resistance, to communicate without government interference. Deaf Republic is so timely for this age of big data. Whether this data is used to market to you or police you, it’s used in some way to trick you. Are we okay with having our language filtered and collected by some agency, government or otherwise? Having our own language used to target us in particular ways, whether positive or negative? In any case, it’s a dangerous and slippery slope, one we’re all living on. Ilya’s book speaks to this in a way that is informed by his experience as an immigrant and a person who’s reliant upon lip reading and other means of communication. Because his English is sort of self-taught, the poetry has these beautiful, lyrical rises and crescendos in places that English speakers don’t normally put them. And it makes his relationship to language one that feels more excited. Gertrude Stein was not a native English speaker. Jack Kerouac was not a native English speaker. Ilya is not a native English speaker. Coming to English after having had another language, I think, gives Ilya’s poetry more delight and pleasure. I went to school with a poet named Malena Morling, who grew up in Sweden, and her English was quite good, but it wasn’t perfect. It was often those imperfect places that made her work really arresting, and made me stop and think, “Wow, I’ve never heard language quite used that way”.

JJ: Is there any hope for us native English speakers?

DP: Of course! Because we don’t all speak alike. I love traveling and hearing the way other people speak. Sometimes my use of a word gets fixed in a particular time, place, location, because maybe that’s where I learned the word first or learned it best. And my pronunciation might forever live in that place. After living in Boston for three years, now I say “quinzy” instead of  “Quincy”—because even though it’s wrong, it sounds better.

JJ: Do you find too much solemnity in contemporary poetry? Too little?

DP: I don’t know. I’m trying to think of how poetry is different now from what is was before. In the grand history of poetry, but particularly of late, I feel that there is too little of the opposite of solemnity, whatever that might be: joy, irony, hutzpah, recklessness. There are solemn occasions—occassions when we need poetry of solemnity—and there are serious matters that should be solemnly addressed. But should these matters be addressed in poetry? I don’t know. Sometimes yes, sometimes no. I don’t know.

JJ: Can we talk about this poem of yours that we’re publishing in the next issue of Gulf Coast: “Is There Something Like Murder for Trees”?

DP: I should have said, “Is there a word like murder for trees?” But when I wrote “Is There Something Like Murder for Trees?” I thought, Well, that sounds so much more open. Because it could be taken as, I’m trying to kill the trees. But once people start reading it, they’ll decide, Oh, it’s collective nouns for trees.” I didn’t want to write, “Some proposed collective nouns for trees.” The most damage you can do to a poem is with the title. Which is why I’m always suspicious of titles, and in my first three books I pretty much didn’t use titles. The titles were the poems’ first lines, mostly. And then in Chronic I played with having titles, and I feel like that taught me a lot. Deep down, I have this love for titles that are sort of slippery. I think Matthea Harvey calls them “greased pigs.”

DP: A greased pig is when you think you got something and it slips away from you. It’s going in some direction that you can’t anticipate because it’s greased.

JJ: Is it possible to separate the title from the rest of the poem, the body of the poem? Do you write greased pig bodies of poems?

DP: Sometimes when I’m writing a poem, I don’t really know where it’s going to go. Maybe I go back and want to pretty it up a little bit. But I resist the impulse to overedit. I’m much more comfortable with just lopping off huge parts that feel like dead appendages. Or maybe I overwrite something. I have a poem right now that I’m carrying around with me. And the conversation that I have constantly is: Should I cut the last two lines, or should I leave them? And until I decide, I don’t want to do anything else with it, because that makes everything else easy.

DP:  Because the poem takes a separate direction in those last two lines. Maybe it’s an interesting direction, or maybe not. I don’t know. Sometimes you have to go back and look and not decide, It’s not like you’re a line cook at a Denny’s, it’s not our job to put out forty plates of pancakes in the morning, it’s not an assembly line, it’s not high pressure. The drive to write a poem is already sort of a thinly veiled excuse to lollygag. Whatever ambitions you have toward a poem are inconsequential compared to what you actually do. Why not just wait around and do other things until I really feel compelled to go write a poem? Even then, I don’t want to hurry it and say, “I’ve gotta decide on this and send it out someplace.” I’ve had poems that I’ve held onto for years. Every once in a while I’ll take one out and do a radical intervention on some part of it.

JJ: And that still may not work?

DP: It’s like that painting that Frank O’Hara’s friend Mike is working on in “Why I’m a Not a Painter.” Poems can wait around until they’ve had their final intervention. I was just on the phone with David Trinidad and we were talking about the William Carlos Williams poem, “The Last Words of My English Grandmother.” It’s a poem where, among other things, his grandmother dies. She's starting to get what we would describe as dementia, and her patience with younger people is really wearing thin, which is beautifully rendered in the poem. But Williams writes a version and then ten or twelve years later goes back and lops off a huge chunk of it, which was the chunk sort of explaining who he was in relationship to her. He realized, by that time, what was unnecessary. The heart of the poem was her decline, and at the end, when she is being lifted up on to the ambulance, she says, “What are all those / fuzzy looking things out there? / Trees? Well, I'm tired / of them and rolled her head away.” That’s how the poem ends.

JJ: Is this going to be featured in your poetry class that’s organized around trees?

DP: That’s what David and I were talking about it. We were talking about all of the ways in which poets look at trees or don’t look at trees. Sometimes trees are a stand-in for the world itself, right? The grandmother is tired of everything, and she’s trying to focus her gaze upon the tree in the distance because she doesn’t want to talk to anyone. She’s done with it. Her grandson says to her, “Let me take you / to the hospital, / … and after you are well / you can do as you please.” And she says, “Yes / you do what you please first / then I can do what I please.” She’s cut off her relationship to the ambulance attendants, and she’s cut off the relationship to her grandson. There’s no human around that the poem makes us aware of who would be engaged with her at that point. So she fixes upon the farthest thing that she can see with her deteriorating vision and she says, “What are those fuzzy things? Trees? Well I’m tired of them.” See? I hear the emphasis as, “I’m tired of them.” Those things over there. Then, the final finger-pointing: “I’m tired of you, I’m tired of you, and I’m tired of them.”